To help pass the time this weekend, dive down this rabbit hole with me and read about the case that could save the contraception mandate.

The Precedent: Obamacare is a Tax, and Taxes Serve the Public Interest

“It’s not called a penalty, it’s called a tax,” she said, met with a round of laughter from the audience, and a note of approval from Chief Justice John Roberts.

Her words hearken back to the first time the Court weighed the constitutionality of the Affordable Care Act–and it’s no small distinction. That the Supreme Court ruled the financial cost of not insuring, or insuring but excluding contraception, “a tax” means there’s already judicial precedent to save the contraception mandate.

“Does the creation of the exemption relieve me from paying taxes when I have a sincere religious belief that taxes are immoral?” Sottomayor asked Clement.

“I think Lee says that taxes are different, and not all exemptions are created equal, because some exemptions undermine the compelling interest,” Clement replied. 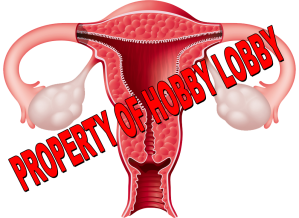 Like in U.S. vs. Lee, the justices–and that includes Sottomayor–were very clearly leaning toward a decision that yes, Hobby Lobby’s has a right to the protection of their religious identity.

But U.S. vs. Lee resolved that paying taxes is different. And the same arguments can be made for the contraception mandate. There’s a broad public interest in maintaining the tax for not providing health insurance and the tax for not providing contraceptive coverage, to get businesses to provide the full range of benefits or allow workers to obtain those benefits, with subsidies on the exchange.

After Lee, Congress introduced the  Religious Freedom Restoration Act, which added to the “compelling government interest” standard set down by Lee a new standard: “the least-restrictive means test.”

There’s not a clear case that there’s a less-restrictive means of getting women access to contraception. Clement and his clients disagree, but the science is very clear.

“This is not about access to contraception,” Clement said. “It’s about who’s going to pay for the government’s preferred subsidy.”

But the reason the government mandated free access was because of the number of studies presented to the Health and Human Services Department in advance of the rule showing that the cost of contraception was a barrier to access for women.

Granted, the two businesses don’t object to covering all forms of contraception. But the Court can’t grant Hobby Lobby and Conestoga Wood exemptions from certain types of contraception without opening the door to all contraceptives being exempt, as Justice Ruth Bader Ginsburg pointed out during the oral arguments (and Clement agreed). That’s because the argument Clement and his clients have presented to the Court is that whatever the religious employer objects to, in this case, would be a substantial burden.

And to grant Hobby Lobby an exemption, as federal attorney General Donald Verrilli Jr. argued, could violate the Establishment Clause of the Constitution by prioritizing the employers’ religion over the employees’.

The least restrictive means test certainly muddies the waters. But I think that if the court wanted, it could rule that there isn’t a less-restrictive means of getting women access to contraceptives. And that would mean the case rests on the precedent of U.S. vs. Lee–the case that could save the contraception mandate.